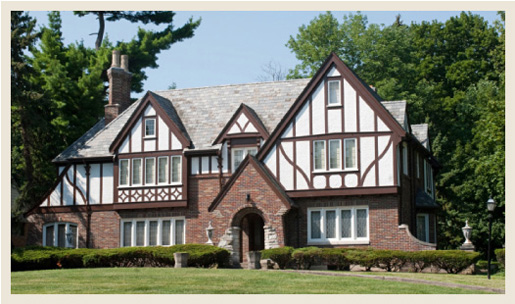 The classic Tudor home can be found in many older neighborhoods across the country. Built by European-trained architects for wealthy homeowners during the 1920s and 30s, these homes range in size from large and baronial to small and modest. Tudor homes declined in popularity after WWII when people favored more patriotic Colonial styles, or began exploring Ranch and modern architecture.

The typical Tudor home can be easily identified by steeply pitched gable rooflines, asymmetrical facades, elaborate chimneys, and the decorative stucco framed by half-timbering on the second story. Casement windows are the norm, arranged in rows of three or five. The homes are usually built using a substantial combination of brick, stone, stucco and heavy wood framing. Elaborate brickwork designs were often found on the entryway.

Tudor styled homes were often adapted Victorian, Arts & Crafts and Colonial features into their designs. Our gallery below explores some of these variations: 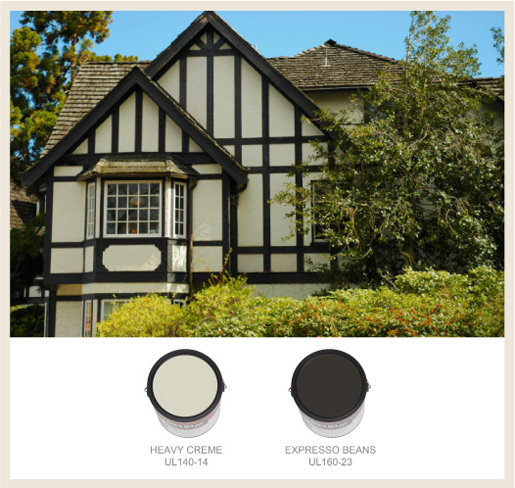 A classic color combo featuring dark exposed half timbers, and white stucco between. 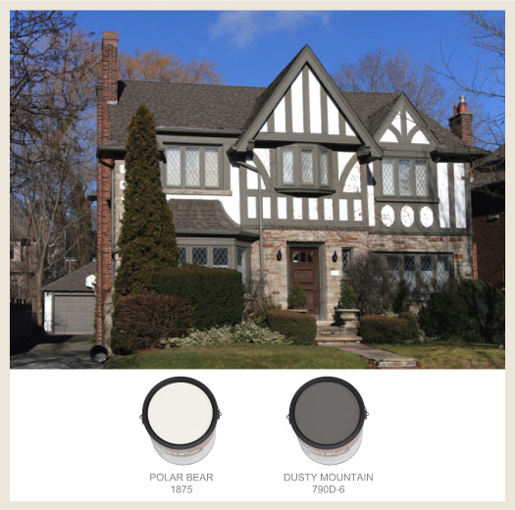 This Tudor style shows a distinctive old-world, English flavor with its primary and secondary side gable. Instead of dark brown, the false timbering has been painted a dark gray. 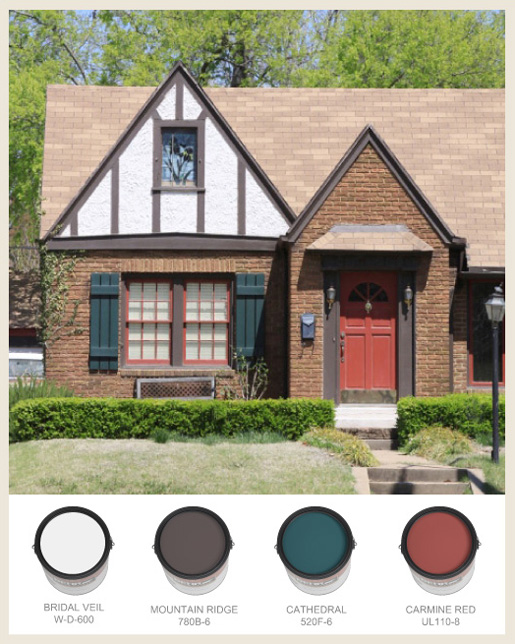 A small Tudor using a four color combo on the paintable areas: White for stucco, dark teal on the shutters, brown on trim and red for door and window detailing. 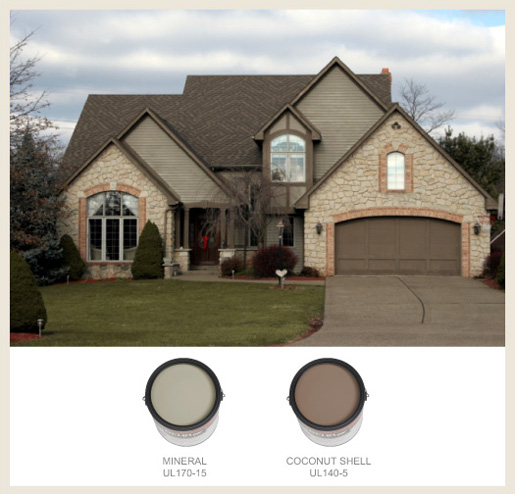 A modern Tudor home with in a light brown neutral color scheme. The style is still recognizable with its multiple facades and steep rooflines. 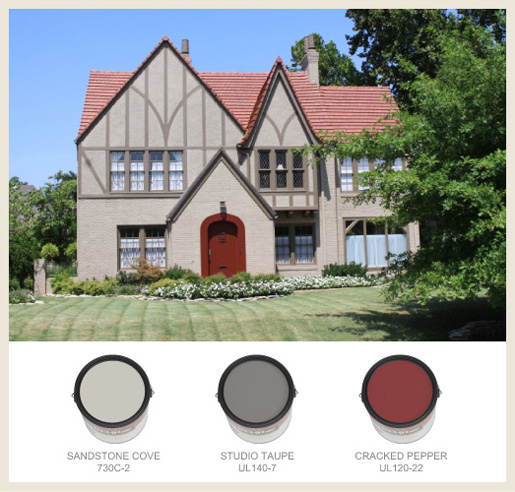 A unique color scheme using tone on tone neutrals and a bright red door to balance the red tile roof. 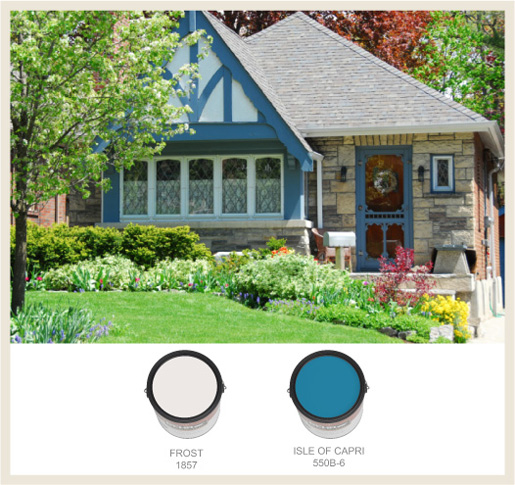 Instead of brown, the trim on this cozy English style cottage been painted a playful teal blue. The charming garden and Victorian styled door gives this home a note of whimsy. 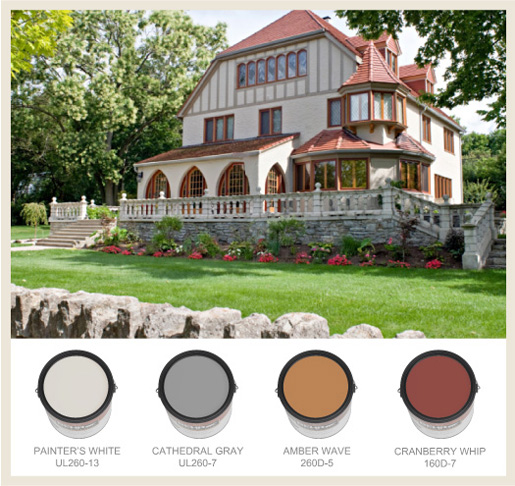 The bold color scheme and unique turret give this Tudor-inspired home a dramatic appearance. 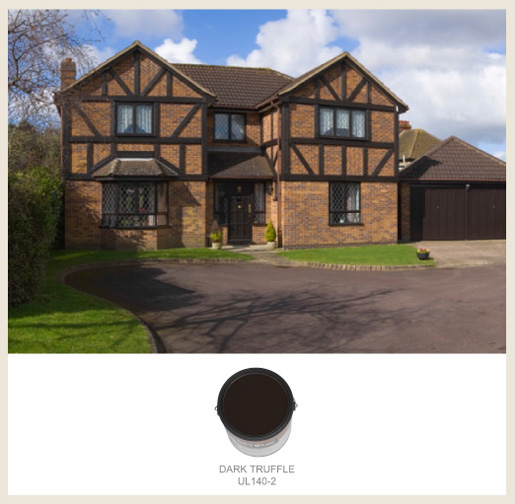 Sometimes Tudor homes were constructed entirely of brick, which was a readily available material in many regions of the country. 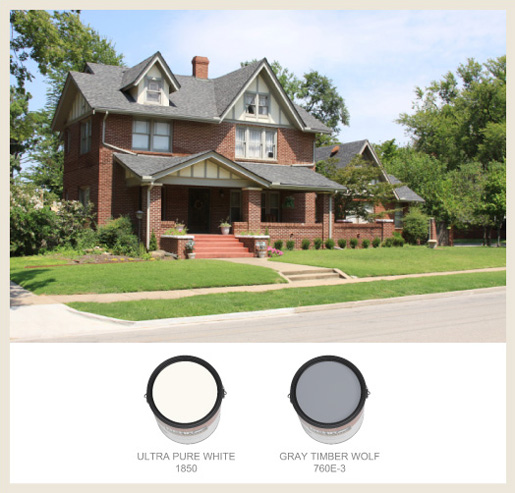 This brick home is a fusion of styles: the upper dormers have Tudor decorative treatment, while the deep porch on the main level is a bungalow attribute. The trim is painted gray to coordinate with the gray roof.

Color of the Month

Color of the Month: Painter’s White

Check out our latest video!